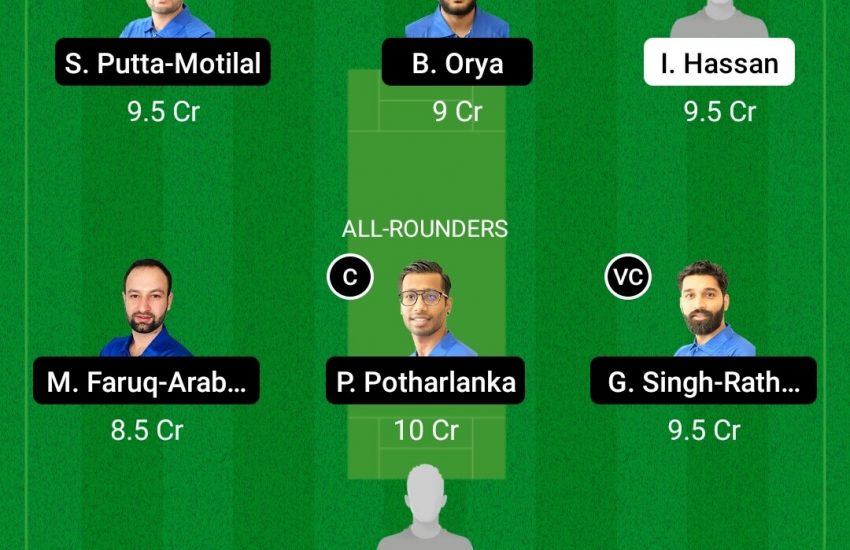 It is the start of a new ECS tournament and it is the ECS Kiel 2021 in Kiel, Germany. In match number three, First Contact square off against MTV Stallions. First Contact will be making their ECS debut. They were formed back in 2017 and will be hoping to make a mark on debut. Meanwhile, MTV Stallions will be the pre-tournament favourites. They were excellent last season where they finished with a Bronze medal in the ECS Kummerfeld 2020 and also reached the final of the ECN Hannover Hitout 2020.

Kieler HTC will be taking on the Moorburger TSV in the league stage match of ECS T10 Kiel at Kiel Cricket Ground. The surface is a balanced one, with equal help for both pacers as well as spinners on offer. The average score on this wicket is 90 runs.

The weather of Kiel The weather looks good and it will remain the same throughout the day. There is no chance of rain during the game.The temperature is hovering around 20 degrees Celsius.

Basit Orya: Basit Orya might be a top captaincy option. He is a destructive opening batsman who can force the pace at the top of the order and he can chip in well with the ball too. In the ECS Kummerfeld 2020, he scored 117 runs at a strike rate of 195 and took six wickets.

Imran Hassan: Imran Hassan is an aggressive opening batsman who can be the game-changer for FCT. He can provide the flying starts and gets runs at a rapid rate. Thus, he can be punted upon as vice-captain.

Mohamad Safi: Mohamad Safi will be a popular budget option. The FCT skipper can contribute big time with both bat and ball. He is the all-time highest wicket-taker for FCT and will be the one to watch out for.

Ujwal Gadiraju: Ujwal Gadiraju is one of the premier bowlers for MTV. He can get the ball to nip around and has good variations as well. He picked up seven wickets in the ECS Kummerfeld 2020.

Asghar Amarkhil: Asghar Amarkhil might prove to be a good pick. The 17-year-old off-spinner has featured in games for Germany Under-19s and can be effective. He is a brilliant fielder as well.

Surajlal Putta Motilal: Suraj Lal Putta Motilal is a hard-hitting top-order batsman and he has the ability to find the fence regularly. Last season, he amassed 115 runs while striking at 147.43 which included 10 sixes.

Zahir Zakhil: Zahir Zakhil may be a pretty useful option and will be a key player for FCT. He can chip in well with both bat and ball and can have a significant impact. Zakhil is set to shoulder a bulk of the responsibility and will need to fire on all cylinders right from the get go.