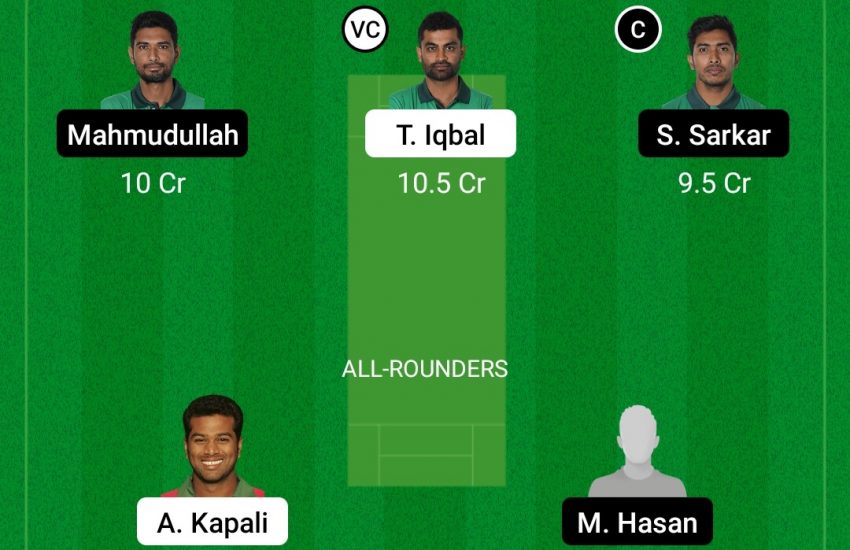 This is Round 1 of the Dhaka T20 league 2021, and in this fixture we have Prime Bank Cricket Club (PBCC) lock horns with Gazi Group Cricketers (GGC). Both teams would look to start the tournament with a win. But we believe that PBCC have a lot of quality players in their side and would be favorites to come out on top in this contest. Both teams are at full strength with the presence of key Bangladesh International players and should provide for a tightly contested affair as they look to begin their respective seasons on a winning note.

Prime Bank Cricket Club will be taking on the Gazi Group Cricketers in the league stage match of Dhaka T20 at Savar. The surface is a balanced one, with good assistance for both pacers and spinners on offer. The average score on this wicket is 150 runs.

Soumya Sarkar: Soumya Sarkar has represented his country across all 3 formats. He is a brilliant middle order batsman with 2489 T20 runs and 29 T20 wickets to his name. We back him to put on a strong performance.

Mustafizur Rahman: Mustafizur was the top wicket-getter last time around with 22 scalps in 10 matches at just 6.26 runs per over including one 4-fer.

Tamim Iqbal: Tamim has collected 324 runs in his previous nine T20 innings at an average of 40.50 and strike rate of 115 bettered by two half-centuries and four 30 plus scores.

Mahmudullah: Mahmudullah arrives for this competition on the back of a 53-run knock in the 3rd ODI against Sri Lanka last Friday.

Anamul Haque: Haque has 2378 runs to his name in T20 Cricket at an average of 23 along with one nine fifties and one Hundred each.

Mohammad Mithun: Mithun has recorded scores of 34 and 53 in his past three T20 innings. He will look to anchor the innings if Prime Bank gets off to a poor start.

Mahedi Hasan: Mahedi Hasan is a good all-rounder to have in your side. In 55 T20 games, he has scored 521 runs and picked up 45 wickets. We back him to deliver an all-round performance.

Shoriful Islam: Shoriful Islam is a tall young pacer who can prove to be a very crucial player in this game. He already has 25 T20 wickets to his name and we back him to add more scalps to his tally.

Rony Talukdar: Hasan Mahmud is a good budget option. The young pacer has a lot of potential. So far, he has scalped 21 T20 wickets in his career. We back him to add a lot more in the upcoming games.

Anamul Haque: Anamul Haque is our keeper batsman for this game. He has represented the national side across all formats. He is also a very good keeper picking up dismissals regularly. With more than 2000 T20 runs, he is a goop pick for your team.