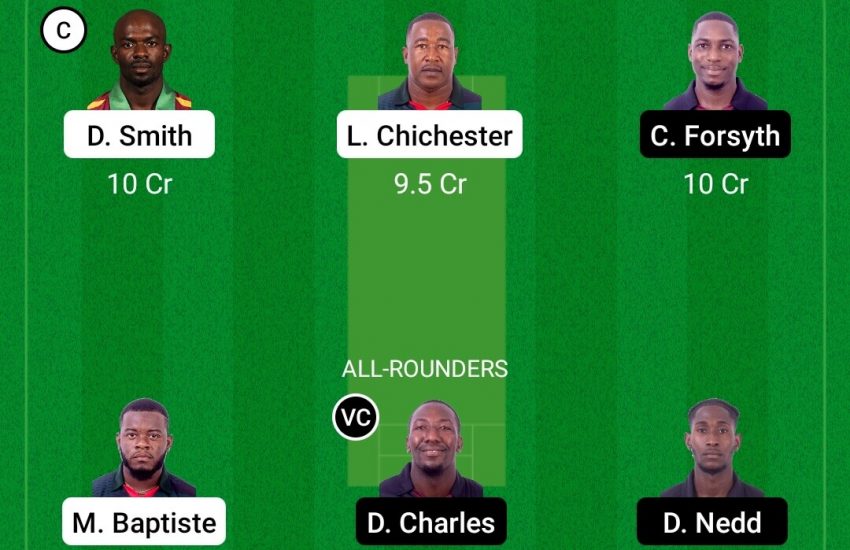 Bay Leaf Blasters will be up against Clove Challengers in the 7th match of Spice Isle T10 at the National Cricket Stadium in Grenada on Wednesday. Bay Leaf Blasters have lost both of their first two matches and are currently placed at the bottom of the points table. On the other hand, Clove Challengers have won 1 out of the 2 matches they played in this season and are placed at the 5th spot on the points table. We expect fireworks in this game and believe this game will be a close contest.

Devon Smith: Smith is a renowned name in the West Indies circuit. He has played at the highest level and is a quality batsman. He scored just 16 in the opening game but came back to score 22 in the next. He will be a top candidate in this game.

Denroy Charles: Denroy Charles is a top quality all-rounder to have in your team. He can make a difference both with the bat and the ball. He has just scored 8 runs and picked up 1 wicket so far. We back him to make amends and put on a strong performance.

Darron Nedd: Nedd is a quality all-rounder. He bowls an odd over in the middle phase of the innings. He also bats in the middle order and can hit the long ball. He scored a brilliant half-century off just 17 balls to help his side get over the line.

Cyprian Forsyth: Forsyth is the most solid batsman in the Challengers’ side. The captain of the side was the only batsman who got going in the opening game as he scored 25*. He missed out in the last game and will look to bat longer in this game.

Leon Chichester: Leon Chichester is leading runs scorer for his side. He is a fine opening batsman who has scored 50 runs so far in 2 innings at a strike rate of 135.13. We back him to deliver a solid start for his side in this game.

Jamie Buddy: Buddy is the leading wicket-taker for Clove Challengers in this tournament so far. He has picked up 2 wickets at an economy rate of 9 in his 2 outings. He is someone who can pick wickets at regular intervals for his side.

Markel Baptiste: Baptiste is someone who can do well with both bat and ball in this upcoming match. He has scored 8 runs at a strike rate of 160 and also picked up 2 wickets at an economy rate of 7 in 2 matches.

Denis Smith: Smith is a fine wicket-keeper batsman. He takes a spot in the middle order and has the ability to hold the innings together. He didn’t get much time to bat in the opening game but made the most of his opportunity in the last game. He has got 39 runs under his belt. If he gets enough balls, he can make a serious impact.