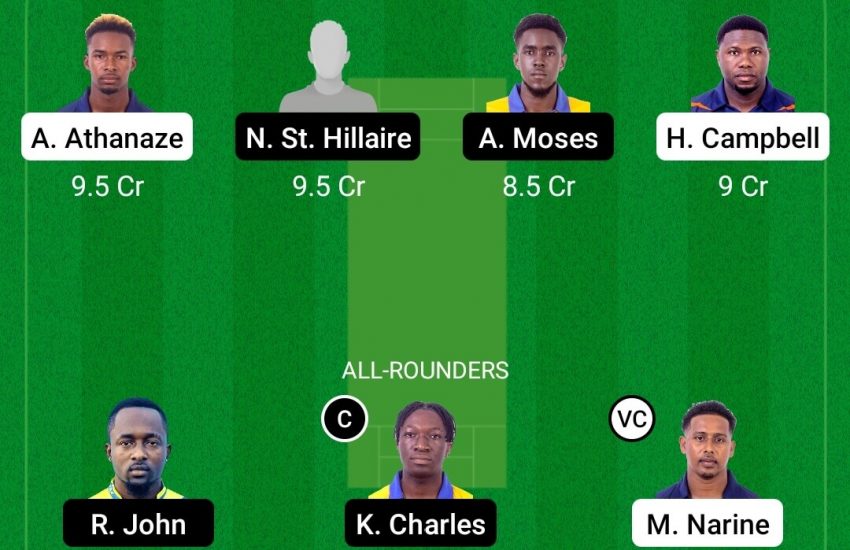 In match number eight of this Spice Isle T10 2021, Cinnamon Pacers will be up against Saffron Strikers. Both teams are coming into this game with a win in their last game. Cinnamon Pacers lost their first game but bounced back with a commanding win over Bay Leaf Blasters. Meanwhile, Saffron Strikers are sitting pretty at the top of the points table with two wins from as many games. They are the only unbeaten side in this competition.

Alick Athanaze: Athanaze was in scintillating form yesterday as he struck a magnificent half-century, scoring 66 off just 28 balls in the opening game. He scored 36 in the previous game and is continuing to be the top-scorer in the competition with 102 runs. He will be a big threat in this game.

Ryan John: Ryan John is a top all-rounder to have in your side. He has scored 29 runs in the innings he has featured while batting. He played with a strike rate of 193.33. He is also fairly economical while bowling and can contribute by picking up crucial wickets.

Kem Charles: Kem Charles is a must-have pick for this game. The bowling all-rounder has scalped an incredible 6 wickets in just 2 games. He has maintained an economy rate of 6.00 in these matches. We back him to continue his brilliant form.

Nickozi St Hillaire: St. Hillaire is a solid top order batsman and provides stability to the Strikers, holding up one end. He looks to bat long and has racked up 48 runs at the same average and a strike rate of close to 130.

Laurie Williams: Williams takes the new ball for the Strikers and exuberates high levels of discipline. He has bagged 2 wickets thus far in the competition and has given away runs at just 5.5 an over on good batting wickets.