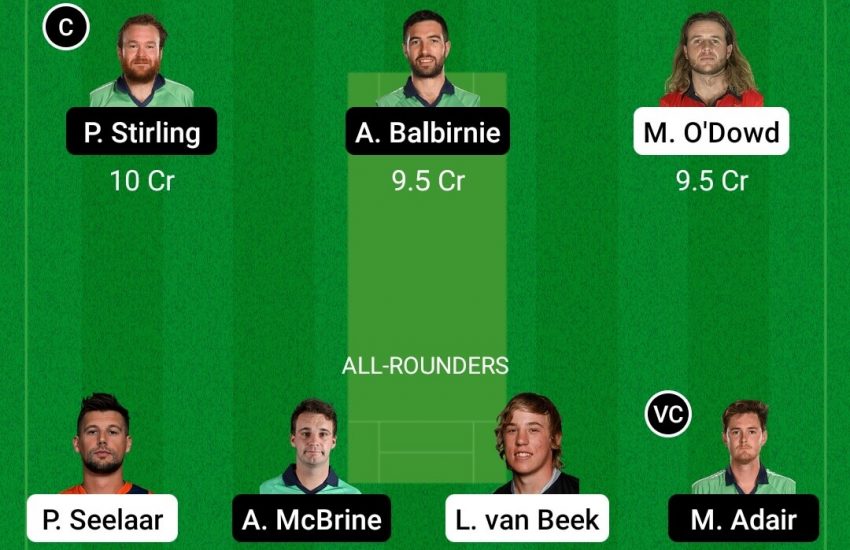 Netherlands are all set to make their debut in the ICC Men’s Cricket World Cup Super League. They will be up against Ireland who have already played two series’ in this ODI Super League. However, Ireland’s form hasn’t been the best. They have won just one match out of the six that they have played in this ODI Super League. In fact, they have won just two out of their 11 ODIs since the start of 2020. Meanwhile, Netherlands are coming off a 1-1 ODI series draw against Scotland recently. Thus, they will be looking to make a solid start in this 13-team league.

Ireland will be taking on Netherlands in the first match of the series as a part of ICC Men’s CWC Super League at Utrecht. The surface is a balanced one, with good help for both pacers as well as spinners on offer. The average score on this wicket is 260 runs.

Paul Stirling: Paul Stirling is one player who can hit any ball out of the park and his team will be relying on him to steer them to an imposing score. In six ODI matches against the Netherlands, Stirling averages 47.66 with one century and has even taken ten wickets at an average of 16.2. He can be your go-to man for captaincy in this match.

George Dockrell: With 364 runs in 6 matches in the ongoing Ireland Inter-Provincial Limited Over Cup Tournament, Dockrell is the top run-getter in that tournament. He has even taken 4 wickets at a economy rate of 5.43. Dockrell is a good choice to be the captain or vice-captain of your fantasy team for this match.

Barry Mccarthy: Barry McCarthy is enjoying a hot spell of form with his tally of 17 dismissals placing him at 1st in the bowling charts in the ongoing Ireland Inter-Provincial Limited Over Cup Tournament. He is likely to be the most effective bowler between the two sides on a pitch where there will be a lot of wickets on offer. McCarthy will be hoping to keep the momentum alive and perform in the first ODI game too.

Pieter Seelaar: Pieter Seelaar has been Netherlands’ backbone over the years. He bowls left-arm spin and is good at controlling the flow of runs and consistently picks up wickets. Seelaar is pretty much handy with the bat as well and can do some serious damage if he gets going.

Andy Balbirnie: Andy Balbirnie has blown hot and cold in the ODI Super League as he scored 156 runs in six innings. However, he is a quality player and expect him to get a big score. Moreover, the Ireland skipper has been in good form in the recent past as he got 277 runs in four innings in the Ireland Inter Provincial Cup.

Vivian Kingma: Vivian Kingma can be punted upon as fantasy vice-captain. The Netherlands fast bowler has been in magnificent form in the recent past. He has taken 10 wickets in his last four List A games. He took 2/55 and 3/5 against Ireland A before taking 3/21 and 2/23 against Scotland.