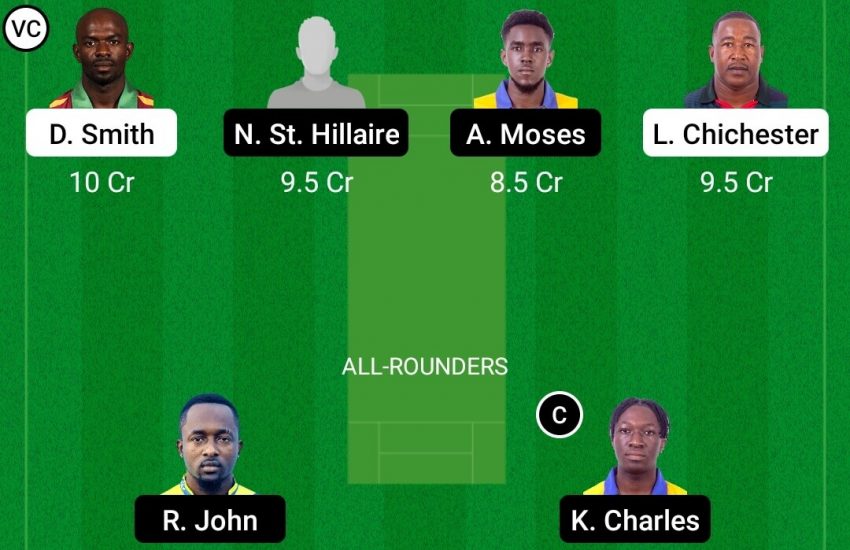 In match number 11 of the Dream11 Spice Isle T10 2021, we have Bay Leaf Blasters (BLB) locking horns with Saffron Strikers (SS). SS are currently at the top of the table with 2 wins and 1 loss from their 3 games. Meanwhile, BLB are in 4th position with 1 win and 2 losses from their 3 games so far. However, SS come into this game on the back of their first defeat and would look to get back to winning ways. BLB on the other hand, got the much-needed win after 2 defeats and would look to continue their form. We expect a closely contested game between these 2 sides.

Kem Charles: Charles is a pivotal player for the Strikers. The seamer has picked up 6 wickets in the competition, including a four-wicket haul, and is the joint highest wicket-taker. He is also a hard-hitting middle order batsman.

Ryan John: Ryan John is a good all-rounder to have in your side. The SS skipper has scored 44 runs in 2 innings at a strike rate of 200.00. He is also a good bowling option. We back him to lead from the front in this game for his side.

Devon Smith: Smith is a renowned name in the West Indies circuit. He has played at the highest level and is a quality batsman. He has scored 56 runs in the competition thus far. He will be looking to score a big one in this game.

Leon Chichester: Chichester is one of the top batsmen in the Blasters’ ranks. The opener has scored 64 runs in the competition already and will look to get a big score under his belt in this game.

Laurie Williams: Williams takes the new ball for the Strikers and exuberates high levels of discipline. He has bagged 2 wickets thus far in the competition and has given away runs at just 7.5 an over on good batting wickets.

Lendon Lawrence: Lendon Lawrence is the top scorer for his side. He opened the innings for his side in the last game and played a fiery knock scoring 32 runs of just 16 balls. We back him to continue this form and provide his team a strong start.

Alex Moses: Alex Moses is a good wicket taking option to have in your team. While he is listed as a batsman, he is actually a strong bowling option. He has picked up 3 wickets so far and we back him to add more scalps to his tally.