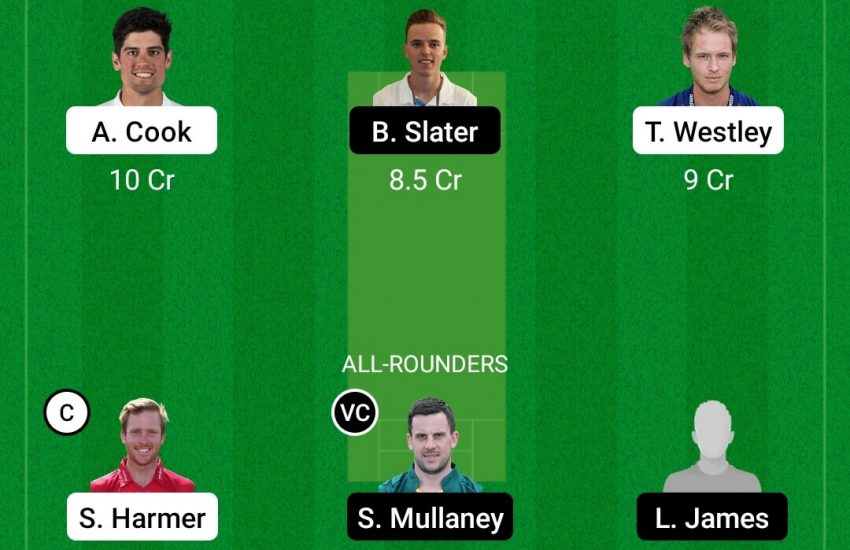 ESS Vs NOT Dream11 Prediction

It is the top of the table clash in Group 1 of this County Championship 2021 as Essex take on Nottinghamshire at the County Ground in Chelmsford. It’s been a slightly up and down season for Essex so far. They lost two and won just one game in their first five games. However, they have stormed back into form with a couple of big wins in their last three games. Meanwhile, Nottinghamshire are coming off a loss in their last game but they have been in solid form overall. They had two draws and one loss from their first three games before they won three games in a row. Thus, they will look to get back to winning ways.

ESS Vs NOT Player Stats

ESS Vs NOT Probable Lineup

ESS Vs NOT Pitch Report

ESS Vs NOT Dream11 Top Picks

Simon Harmer: Simon Harmer is going to be a top captaincy option. He has been absolutely magnificent with the ball and he has contributed well with the bat as well. The off-spinner has taken 34 wickets in eight games and has scored 242 runs.

Luke Fletcher: Luke Fletcher has been in splendid form with the ball and he has led the charge with the ball for Nottinghamshire. He has returned with 36 wickets at a stunning average of 13.22. Thus, 32-year-old seamer can be backed as vice-captain.

Samuel Cook: Samuel Cook has been very consistent with the ball and has constantly delivered with the ball. The Essex pacer has picked up 31 wickets at an average of 17.12. Thus, he can be punted upon as vice-captain.

Ben Slater: Opening batsman Ben Slater has been Nottinghamshire’s best batsman this season. He is coming off a superb hundred against Warwickshire. Overall, he has scored 503 runs from seven matches. He will be the captain for this match.

Alastair Cook: Alastair Cook has been pretty inconsistent in this 2021 County season. The veteran opener has scored 378 runs and has a hundred and two fifties in his last five games. He is a quality player and can be backed to come good.

Peter Siddle: Peter Siddle has bowled beautifully in the last couple of games. He took 6/38 against Warwickshire before returning with figures of 3/29 & 3/47 against Durham. Hence, he will be a top bowling pick.

Dane Paterson: South African speedster Dane Paterson has been bowling with some nice rhythm of late. He has taken 24 wickets from six matches. Paterson got a five-wicket haul in the last game against Warwickshire.

Lyndon James: Lyndon James is a promising all-rounder for Nottinghamshire. He has contributed 313 runs and 11 wickets from seven matches. James came up with 23 runs and one wicket against Warwickshire.

Tom Westley: Essex skipper Tom Westley has had a fine season with the bat until now. He had a quiet outing in the previous match but his overall form has been very good. He has scored 502 runs from eight matches.

Steven Mullaney: Nottinghamshire captain Steven Mullaney has been very good with the bat so far. The batting all-rounder has come up with 408 runs and four wickets from seven matches. Mullaney produced 36 runs and one wicket in the last match against Warwickshire.

ESS Vs NOT Dream11 Team

NOTE: I Will Provide My Final Updated Team On Telegram. So, Kindly Join Our New Telegram Channel For Daily Free Fantasy Teams – Sports-Fantasy.in (ESS Vs NOT Dream11 Team)