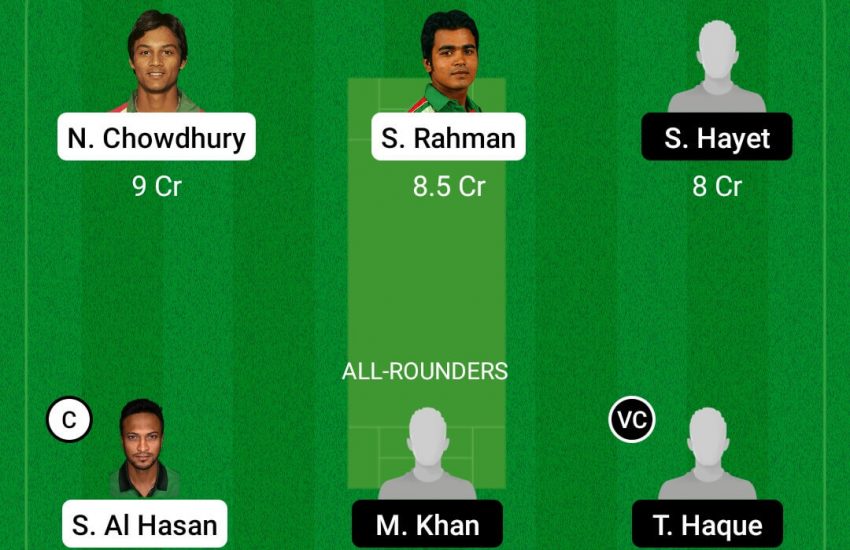 The pitch at the Shere Bangla National Stadium, Mirpur tends to be more suited for the bowlers than it is for batters. The average first-innings score on this ground is 145 runs.

Shakib Al Hasan: Shakib Al Hasan is the best all-rounder for his team who can give good number of points with bat and ball. He is one of the most experienced players for his side and is equally good with both bat and ball. He was on display with his bat in the last game where he scored 29 runs and scalped 2 wickets as well. He will look to add more to his tally in this game, making him a must have pick.

Tasamul Haque: Tasamul Haque is coming off 65 runs knock from his previous outing and will be hoping to deliver once again in this match as well. Tasamul can turn the game anytime with his incredible hard-hitting ability. He can reap rewards for your fantasy team in this match. He will be a top captaincy pick for this clash.

Shamsur Rahman: Shamsur Rahman is one of the best batsman to have in this game. He is one player who can hit any ball out of the park, and his team will be relying on him to steer them to an imposing score. Shamsur Rahman will be a good choice for captaincy or vice-captaincy in Grand Leagues.

Moin Khan: Moin Khan is a good all-rounder to have in your side. He is a solid batsman middle order batsman, who is also capable of picking up wickets. In the last match he scored 22 runs. We back him to put up strong performances in upcoming games.

Nazmul Hossain Milon: Nazmul Hossain Milon is a good all-rounder to have in your side. He is a reliable batsman who is also capable of picking crucial wickets. He brings good value to his side with his domestic cricket experience across all formats.

Abu Jayed: Abu Jayed is coming off 1 wicket from his previous outing and will be hoping to deliver once again in this match with the ball early on. He will be seen bowling either in the power-play overs or in death overs. He is a wicket taking option as well.