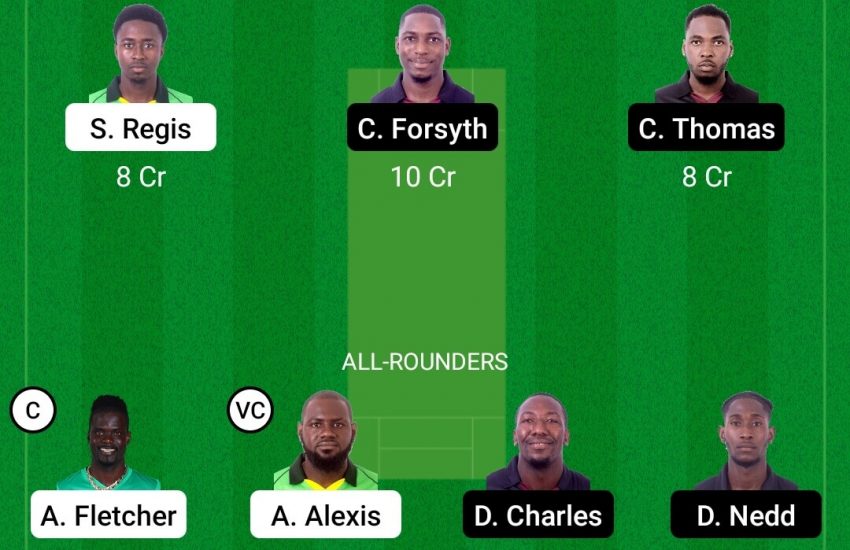 The Nutmeg Warriors take on the Clove Challengers here with both teams hoping for a change in fortunes. NW are 5th in the standings with 2 points and a NRR of -0.934 while CC are place below them at the bottom of the table with 2 points and an NRR of -1.808. Another loss here for either team could see them lose a lot of ground at this early stage of the tournament so there is plenty at stake. We have recently seen some high-scoring games here, with the team batting first winning each of the last two games yesterday.

Andre Fletcher: Fletcher was the star of the show on the opening night but hasn’t had the same impact in the next couple of games, though, he has done well. The West Indies international has picked up 8 wickets and is the leading wicket-taker in the competition. He has also batted well, scoring 93 at an average of 46.5 and a strike rate nearing 207. He is the top captaincy candidate in the game.

Akeem Alexis: Akeem Alexis has been very good with both bat and ball in this tournament. He has scored 39 runs in two innings at a strike-rate of 177.27. With the ball, he has taken three wickets. Thus, he will be a top vice-captaincy option.

Darron Nedd: Darron Nedd has been very good with the bat. He has scored 62 runs while striking at 206.66. Moreover, more than 77% of his runs have come in boundaries. Thus, he could be a solid choice as vice-captain.

Seandell Regis: Seandell Regis is the second leading scorer for NW with 75 runs in 3 innings at a strike rate of 156.25. He has a top score of 36 and has hit 7 fours to go with 4 sixes.

Cyprian Forsyth: Forsyth is the most solid batsman in the Challengers’ side. The captain of the side was the only batsman who got going in the opening game as he scored 25*. He has missed out in the last couple of games and will look to put in a solid display in this game.

Haston Jackson: Jackson is a key bowler for the Nutmeg Warriors side. He takes the new ball and looks to give early dents to the opposition. He has bagged 3 wickets in the competition. He can also swing his bat and get some important runs.

Teddy Bishop: Bishop is an aggressive top order batsman. The wicket-keeper batsman looks to give his side a flying start. He has scored 33 runs in the competition, including 18 off 8 in the last game.