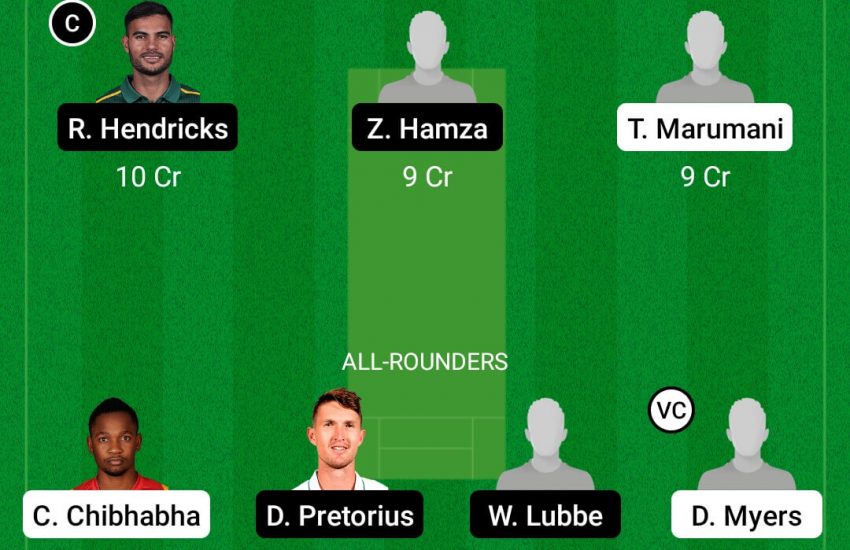 Zimbabwe-A kept this four-match Unofficial One Day series alive with a 22 run victory by the D/L method on Wednesday. After a poor display in the first couple of games, the Zimbabwean bowlers bounced back to restrict South Africa-A to a mere 226/9 and in reply, Chamu Chibhabha and Milton Shumba rebuilt the innings with a 120 plus run stand for the fifth wicket until rain eventually interrupted proceedings in the 38th over.

South Africa A take on Zimbabwe A in 4th ODI at Harare. SA-A suffered a shock defeat in last match and would look to bounce back. The pitch is expected to be batting friendly and plenty of runs are expected.

Reeza Hendricks: Hendricks has been an active T20 player for South Africa but hasn’t quite made it to the ODI setup yet. This is an important competition for him in that regard. He has struck two half-centuries thus far and has even picked up a wicket. He has 121 runs already and could be a big threat in this game.

Ryan Rickelton: Rickelton is a big name in South African domestic cricket. The left-handed wicket-keeper batsman is a dangerous campaigner. Though he missed out in the opening game, he came back strongly in the 2nd game, scoring 169. He managed just 11 in the last game but is still the leading run-getter in the competition with 184 runs. He has also been brilliant behind the stumps. He will look to hit back hard in this game.

Dion Myers: Myers is a quality middle order batsman and carried Zimbabwe-A’s innings in the previous game. His innings of 96 helped Zimbabwe-A reach a total of 319 in the opening game, while his score of 70 in the next game kept them in the hunt for a while. He has a wicket to his name as well. He failed to get going with the bat in the last game but he picked up 3 wickets.

Dwaine Pretorius: Dwaine Pretorius is a bowling all-rounder who bowls medium pace and bats in middle order. He has good hitting ability and can score quick runs. His bowling form is good and he can be backed for an all-round performance. He has picked 5 wickets so far.

Janneman Malan: Janneman Malan is an attacking opening batsman who can tear any bowling attack apart on his day. He will not let the bowlers settle down and keep on playing big shots. He can prove to be a game changer if not dismissed early. He has scored 105 runs so far.

Tadiwanashe Marumani: Marumani is an aggressive player and has done well at the top of the order. The top order batsman scored 82 off just 73 balls in the opening game and showed glimpses of what he could do. He has amassed 141 runs in the competition at an average of 47.

Luke Jongwe: Luke Jongwe is a pace bowling all-rounder and an exciting prospect for ZIM. He will bowl at death and has a good chance of picking wickets as he bowls with good control. He is also a handy batsman who can score crucial runs if top order fails. He has picked 2 wickets so far.