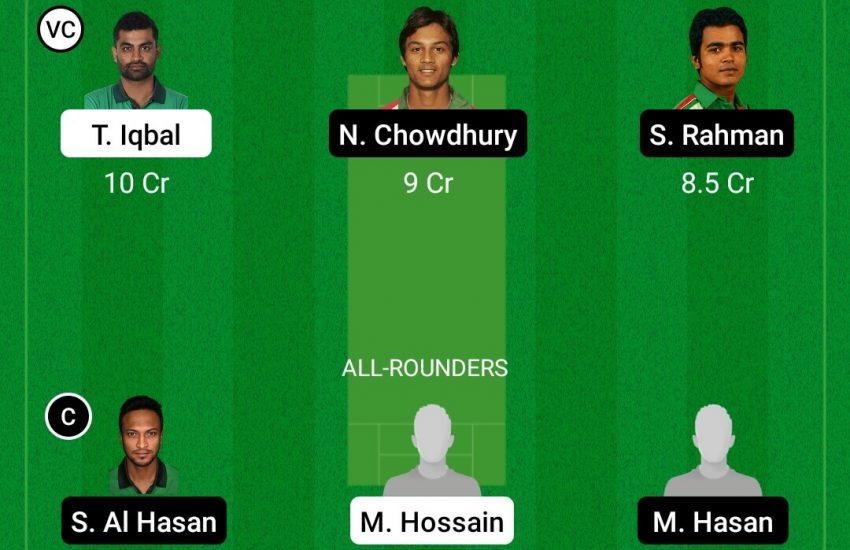 The 18th match of the Dhaka Premier Division T20 League 2021 will see the top-two teams in action. Anamul Haque-led Prime Bank Cricket Club will lock horns with the Shakib-led Mohammedan Sporting Club in the final fixture on Saturday. Both these sides are sailing on the same boat at the moment with two wins in two matches but that will change at the end of this fixture. A crackerjack of a contest is on the cards.

The pitch at the Shere Bangla National Stadium, Mirpur tends to be more suited for the bowlers than it is for batters. The average first-innings score on this ground is 145 runs.

Tamim Iqbal: Tamim Iqbal is coming off 32 runs knock from his previous outing and will be hoping to deliver once again in this match as well. Tamim can turn the game anytime with his incredible hard-hitting ability. He can reap rewards for your fantasy team in this match. He will be a top captaincy pick for this clash.

Shakib Al Hasan: Shakib Al Hasan is the best all-rounder for his team who can give good number of points with bat and ball. He is one of the most experienced players for his side and is equally good with both bat and ball. He is coming off 1 wicket from his previous outing and will be hoping to deliver once again in this match with the ball early on.

Nayeem Hasan: Nayeem Hasan is the main bowler for his side. He has scalped 5 wickets at an average 7.20 in this tournament so far. His wicket-taking abilities make him one among the top captaincy picks for this face-off.

Anamul Haque: Prime Bank Cricket Club skipper Anamul Haque hasn’t lived up to his expectations with the bat but he is still a very good option to consider due to his hard-hitting ability at the top of the order. He is due for a big knock and it’s just a matter of time before he gets back to his best.

Mohammad Mithun: Mohammad Mithun is a hard-hitting middle-order batter. He hasn’t really fired yet but he can be backed to come good. He can find the boundaries regularly and can make vital contributions.

Taskin Ahmed: Taskin Ahmed is coming off 2 wickets from his previous outing and will be hoping to deliver once again in this match with the ball early on. He will be seen bowling either in the power-play overs or in death overs. He is a wicket-taking option as well.

Mustafizur Rahman: Mustafizur Rahman is the main bowler for his side. He has scalped 3 wickets at an average 15.33 in this tournament so far. His wicket-taking abilities make him one of the top picks for this face-off.