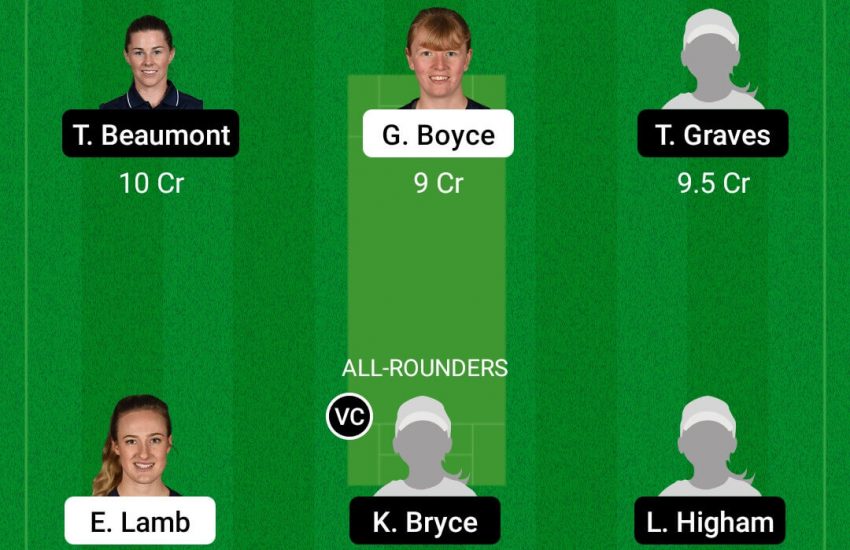 Thunder will be up against Lightning in round three of this Rachael Heyhoe Flint Trophy 2021. Thunder have been pretty good. They lost a nail-biting game against Western Storm which was a last-ball finish. However, they bounced back strongly to beat Sunrisers in their next game to open their account. Meanwhile, Lightning have lost both their games so far. They couldn’t defend 214 against Southern Vipers before they failed to chase down 152 against Northern Diamonds. Thus, they will be desperate to bounce back.

Thunder will be taking on Lightning in the league stage match of Women’s ODD at Chester. The surface is a batting-friendly one, with decent help for the spinners on offer. The average score on this wicket is 250 runs.

Sophie Ecclestone: Ecclestone is a must have pick for this game. She has picked up an impressive 6 wickets in 2 games at an economy rate of 4.70. She has also scored 49 runs. We back her to have an impact on this game.

Kate Cross: Bowling all-rounder Kate Cross has started this Rachael Heyhoe Flint Trophy on a great note. Just like her teammate Sophie Ecclestone, Kate Cross too has bagged two three-wicket hauls in this competition until now. She will be the captain for this match.

Emma Lamb: Emma Lamb is going to be a popular captaincy choice. She has been batting really well and she got a hundred in the first game of the season. She has bowled decently too and has taken one wicket.

Kathryn Bryce: Scottish captain Kathryn Bryce is star all-rounder for Lightning. She hasn’t contributed much with the bat so far but she has been on on fire with the ball. Overall, she has come up with 14 runs and five wickets from two matches.

Tammy Beaumont: Tammy Beaumont has been in solid touch with the bat. The premier England opener has got scores of 57 and 21 in this tournament. Thus, she will be a top batting option.

Teresa Graves: Teresa Graves might be a pretty effective pick. She has got a couple of good scores with the bat and she has also picked up three wickets at an economy rate of 3.64 with the bat.