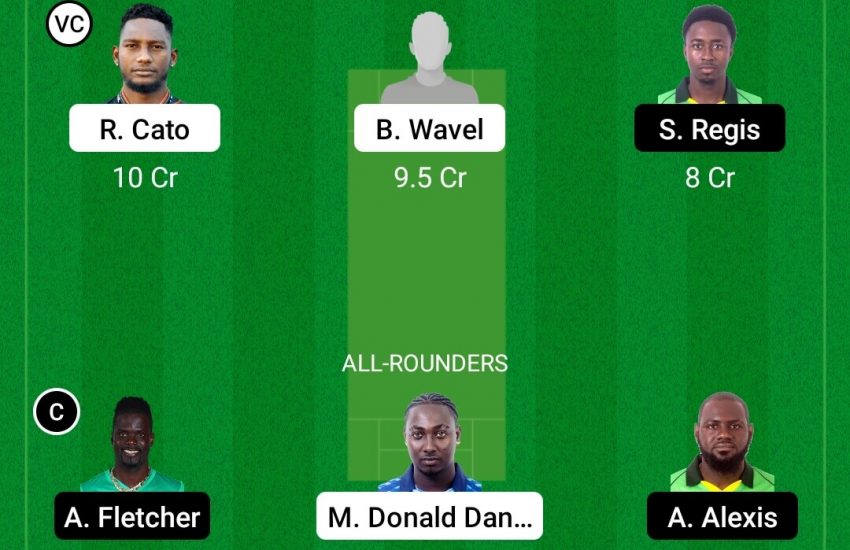 In match number 22 of this Spice Isle T10 2021, Ginger Generals take on Nutmeg Warriors. Ginger Generals have been pretty inconsistent throughout this tournament. They have three wins and three losses apart from a washout and are placed third on the points table. Meanwhile, Nutmeg Warriors haven’t been at their best and have lost four games. They have just two wins to their name and are reeling at the fifth spot on the points table. They will be looking to turn things around.

Andre Fletcher: Fletcher is the star player in the league and his performances have pretty much matched to it. The West Indies international has picked up 9 wickets and is the joint leading wicket-taker in the competition. He has also batted well, scoring 245 at an average of 49 and a healthy strike rate of 238. He is 2nd on the list of top run-getters. He is the top captaincy candidate in the game.

Roland Cato: Roland Cato has been in top form with the bat. He has mustered 152 runs and has a strike-rate of 197.40. Moreover, he has hit 16 sixes in this tournament so far. Thus, he will be a top pick as vice-captain.

Edward Larry: Larry is a quality bowler and is a wicket-taker. He bagged a wicket for just 13 in the opening game and has gone on to pick 5 wickets in the next games to take his tally to 6. He is also a useful batsman and can hit the long ball. He has 39 runs in his kitty.

Mc Donald Daniel: Mc Donald Daniel might be an effective choice as vice-captain. He has a strike-rate of 160.97 with the bat and has made 66 runs averaging 22. Furthermore, he has four wickets to his name with the ball.

Redhead Nicklaus: Redhead Nicklaus is the leading wicket taker for GG with 8 wickets in 6 innings at an average of 12.62, an economy of 10.10, and a strike rate of 7.50. He has a BBI of 4/23 and is an excellent source for wickets.

Akeem Alexis: Alexis is a fine all-rounder and has done a superb job. He has not only picked up 6 wickets but has also done a stellar job with the bat, having scored 70 runs thus far.