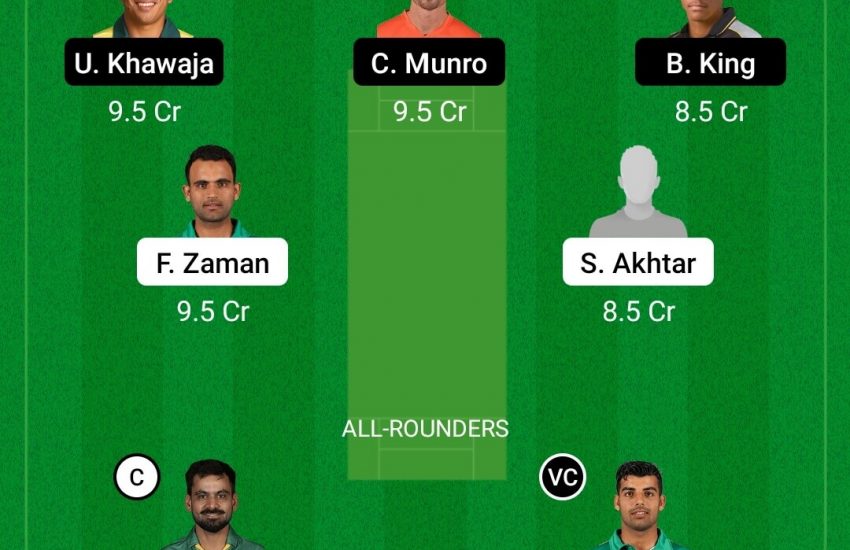 After a three month layoff, the Pakistan Super League 2021 is set to resume in Abu Dhabi. The third placed Islamabad United will lock horns with the fourth placed Lahore Qalandars in the 15th match of the tournament. Both these sides are sailing on the same boat at the moment with three wins in four matches. Lahore Qalandars have acquired four new players while Islamabad United have acquired only player in the form of Australian Usman Khawaja. All in all, a crackerjack of a match is on the cards.

Fakhar Zaman: Lahore Qalandars’ star opening batsman Fakhar Zaman is a must-have pick in the fantasy team. In the four outings, he has two fifty-plus scores and he’s currently the fourth leading run-getter of this season with 189 runs in four matches. He will be the captain for this match.

Colin Munro: Left-handed batsman Colin Munro is set to play his first game of this tournament for the United. He withdrew his name ahead of the first leg but his addition will be a massive boost for Islamabad United who will be without Alex Hales for this second leg. He is expected to bat at no.3, a role which he did very well in the last year’s BBL.

Rashid Khan: Rashid Khan is a must pick. The Afghanistan leg-spinner is a global T20 superstar and is a wicket-taking bowler. He gives absolutely nothing away and constantly picks up wickets. Moreover, he can tonk it around with the bat lower down the order.

Faheem Ashraf: Faheem Ashraf is yet another good all-rounder pick for this game. He has scored 49 runs and has picked up 4 wickets so far in this tournament. His ability to deliver on either side of the innings makes him an essential pick for our fantasy team

Mohammad Hafeez: Mohammad Hafeez is going to be a popular captaincy choice. He has been consistent getting big runs in T20 cricket in the last couple of years. In PSL 2021, he accumulated 181 runs at a strike-rate of 175.72.

Hasan Ali: Right-arm pacer Hasan Ali has been the pick of the bowlers for Islamabad United. He has taken at least one wicket in all the games. Overall, he has taken six wickets from four matches. Moreover, his form has been very good of late and the fantasy users can expect good returns from him in this second leg.

Shaheen Afridi: Left-arm pacer Shaheen Afridi is a must-have pick in the fantasy team. He was sensational in the first leg in Karachi where he took nine wickets in four matches. Afridi will look to replicate his success in the remainder of the PSL as well.

Shadab Khan: Islamabad United skipper Shadab Khan struggled to get going in the first leg but he is expected to come good in this second leg in Abu Dhabi. So far, he has produced 32 runs and two wickets in four matches.