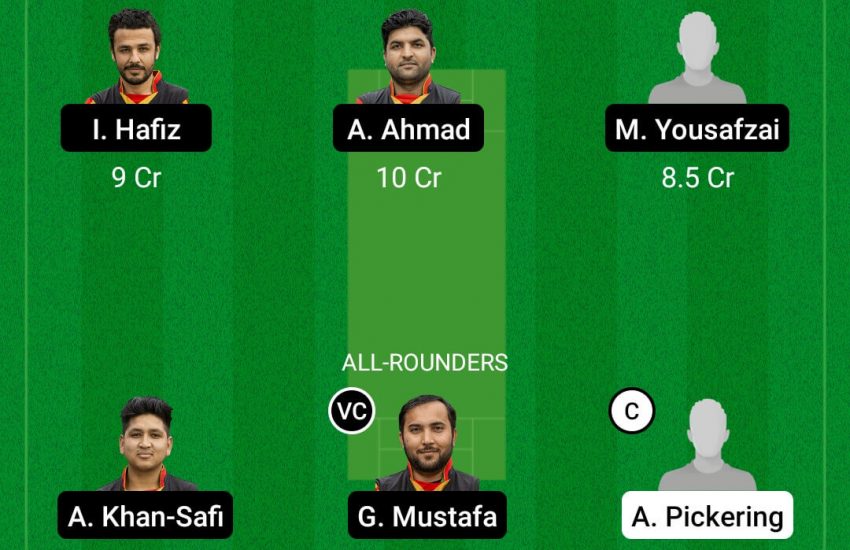 The 37th match of the ECS Kiel T10 will be played between THCC Hamburg and PSV Hann Munden in the first match of the quadruple-header on Thursday. Both the teams have had a disappointing campaign so far. PSV Hann Munden have two wins in five matches while THCC Hamburg have only one win in six matches. With the knockouts fast approaching, a win in this fixture would help massively. All in all, a high scoring encounter is on the cards.

THCC Hamburg will be taking on the PSV Hann Munden in the league stage match of FanCode ECS T10 Kiel at Kiel Cricket Ground. The surface is a balanced one, with good assistance for both pacers as well as spinners on offer. The average score on this wicket is 85 runs.

Angus Pickering: THCC Hamburg’s star all-rounder Angus Pickering might have bagged a duck in the last match but he has performed like an MVP in this competition. He has produced 100 runs and eight scalps in six matches. He will be the captain for this match.

Awal Khan Safi: Awal Khan-Safi hasn’t contributed much with the bat so far but he has been on fire with the ball. He has taken six wickets in five matches so far. Although he has struggled with the bat, his dominance with the ball makes him a viable option for vice-captaincy.

Amin Zadran: Zadran bowled exceptionally well in this season so far. He has picked up 7 wickets at an economy rate of 8.50 in the 5 matches he played for his side. He can also score some quick-fire runs in the lower middle-order.

Abhik Jana: Abhik Jana is a medium pace bowler who will look to stop the run flow and build pressure. He will bowl wicket to wicket line and would not allow batsmen to free their arms. The pressure would ultimately lead to wickets. He has picked 3 wickets and scored 30 runs in last 3 matches.

Gulraiz Mustafa: Gulraiz Mustafa is a bowling all-rounder who will bowl spin and bat in middle order. He bowls with good accuracy and can be backed to pick wickets. He will be responsible to hold one end if top order fails. He has picked 1 wicket and scored 46 runs in last 4 matches.

Asad Sangari: Asad is a solid top order batsman who can hit the ball out of the ground on a consistent basis. He is very strong on leg side and plays the slog shot with sheer power. If he gets a good start, bowlers would be under immense pressure. He has scored 37 runs in last 3 matches.