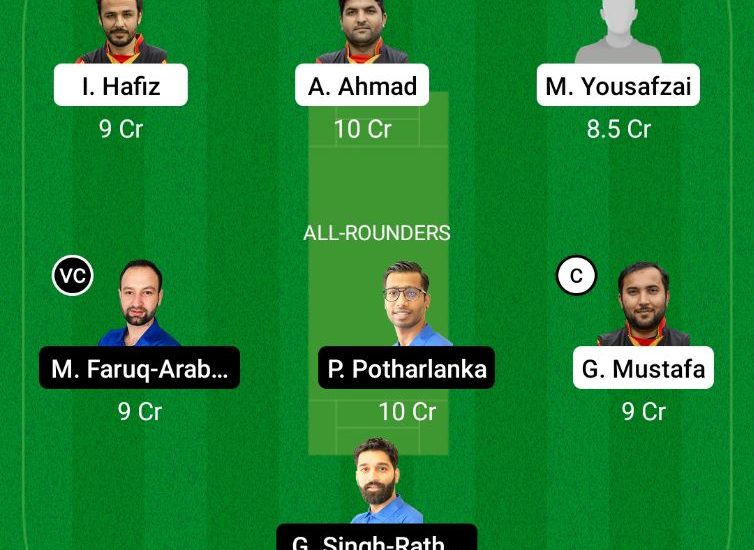 PSV Hann-Munden will be up against MTV Stallions in the second semi-final of ECS T10 Kiel at the Kiel Cricket Ground on Saturday. PSV Hann-Munden finished at the second spot in the Group B points table having won five out of their eight league stage matches. MTV Stallions, on the other hand, have managed to pick up seven wins from their eight league stage matches thereby finishing at the top of the Group A points table.

The pitch at Kiel Cricket Ground has been slightly on the slower side. Batsmen need to settle down a bit before going for their shots. 85 runs has been the first innings par score with the teams batting first having a good win record at this venue.

Gaurav Singh Rathore: Gaurav Singh Rathore is a good all-rounder option for this game. He has scored 103 runs and has picked up 7 wickets so far in this tournament. He will look to add more to his tally in this game, making him a must have pick for our fantasy team.

Adeel Ahmad: Adeel Ahmad is a very dangerous batsman and can clear the boundary at critical times against any bowler. He has scored 257 runs from 9 matches at an average of 36.71 and strike rate of 247.11 in this tournament. He can reap rewards for your fantasy team in this match.

Gulraiz Mustafa: Gulraiz Mustafa is a bowling all-rounder who will bowl spin and bat in middle order. He bowls with good accuracy and can be backed to pick wickets. He will be responsible to hold one end if top order fails. He has picked 2 wickets and scored 85 runs in last 3 matches.

Mohammad Faruq Arabzai: Faruq Arabzai is a batting all-rounder who will bat in top order and also bowl his quota of 2 overs. He has the ability to play big innings and gets his majority of runs in boundaries. He is also a useful bowler and can pick 1-2 wickets in this match. He has scored 42 runs and picked 2 wickets in last 3 matches.

Awal Khan Safi: Awal Khan Safi is a pace bowling all-rounder who is also known for his hitting abilities. He bowls with sheer pace and has good bouncers. He can be counted to pick wickets. He has picked 3 wickets and scored 41 runs in last 3 matches.

Prashanth Potharlanka: Prashanth is a batting all-rounder who will bat in top order and bowl a over or two of off spin. He can hit the ball hard and boundaries will look small if he gets going. He has picked 2 wickets and scored 60 runs in last 3 matches.

Amin Zadran: Amin Zadran is the highest wicket-taker from PSV for this game. He has bagged 13 wickets so far in this tournament. He will look to grab few more and add to his current tally in this game.