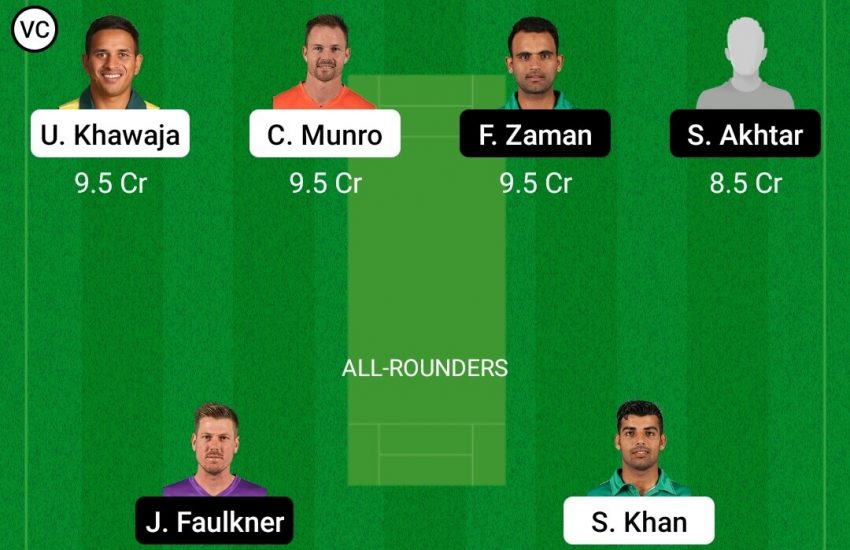 The 21st match of the Pakistan Super League 2021 will see the top two teams in action in the first match of the double-header on Sunday. Both Lahore Qalandars and Islamabad United have had a very good tournament until now. The Qalandars are currently at the top of the table with five wins in six matches while United are placed second with four wins in six matches. A crackerjack of a match is on the cards.

Islamabad United and Lahore Qalandars will face each other in this match of the Pakistan Super League at Sheikh Zayed Stadium, Abu Dhabi. The pitch in Abu Dhabi assists both batsmen and bowlers. The average score on this wicket is 150 runs.

Colin Munro: Hard-hitting opening batsman Munro struggled to get going against the same opposition in the opening fixture of the second leg but he set the stage ablaze the other day as he went bonkers against the bottom-placed Quetta Gladiators. He scored a cracking 36-ball 90 to set up a ten-wicket win for Islamabad United. He will look to replicate the same in this match as well.

Fakhar Zaman: Left-handed opening batsman Fakhar Zaman hasn’t lived up to the expectations. Apart from two eighty-plus knocks, he has performed subpar in the other four games. However, he cannot be ignored due to his batting prowess. He is due for a big knock and it is just a matter of time before he gets back to his best. With the playoffs approaching, his form will be crucial for the Qalandars.

Shadab Khan: A prodigious turner of the ball, teenage leg-spinner Shadab Khan is one of the finds of PSL. He has also established himself in the national team. His ability to take wickets while maintaining an excellent economy rate makes him so special. He also bats in top order in PSL. He has picked 2 wickets in last 2 matches.

Rashid Khan: Rashid Khan has established himself as a global superstar due to his immense potential. Not a big turner of the ball, he puts batsmen under constant pressure by bowling quickly through the air. His biggest weapon is a very accurate googly which gets him regular wickets. He is also known for his hitting abilities and can play some unorthodox shots. He has picked 6 wickets in last 2 matches.

James Faulkner: Star bowling all-rounder James Faulkner is a must-have pick in the fantasy team for this match. He has been amazing in the two games that he has played so far for the Qalandars. After bagging a three-fer against the same opposition he followed it up with two wickets in the last match against Zalmi. He will be the captain for this match.

Shaheen Afridi: Shaheen Afridi is considered as generational talent by many greats. He will bowl with the new ball and then come back to bowl at death. He will keep on attacking the stumps and gets most of his dismissal as bowled or LBW. He has picked 1 wicket in last 2 matches but has overall tally of 10 wickets in this edition of PSL.

Mohammad Hafeez: Mohammad Hafeez has had a couple of indifferent games. However, the Pakistan veteran is someone who can get big scores in the middle-order. Moreover, he is still the leading run-getter for Lahore Qalandars in this tournament with 212 runs from six games.