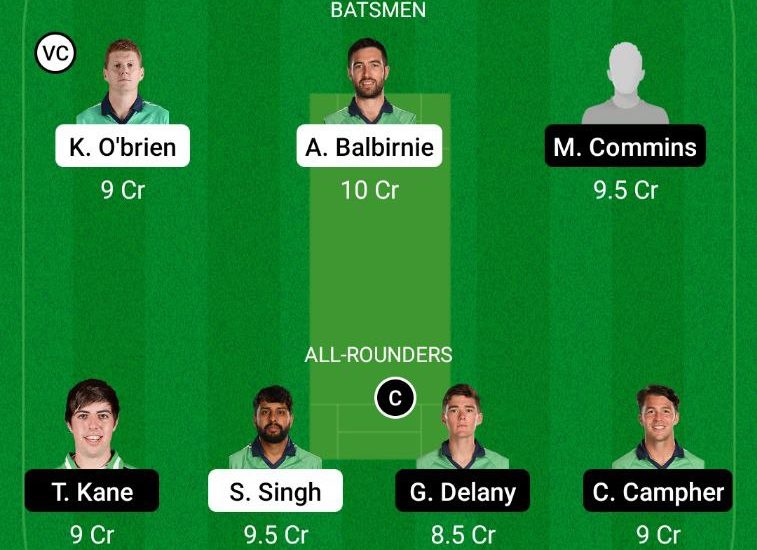 Ireland’s domestic season rolls on with the Inter-Provincial T20 Trophy. Leinster Lightning finished on top of the points ladder last time around and were the only undefeated team whereas Munster Reds finished second-bottom with eight points before the tournament was eventually called off due to a positive COVID-19 case.

Munster Reds and Leinster Lightning face each other in this game. The surface is a balanced one, with great assistance for both pacers and spinners on offer. The average score on this wicket is 121 runs.

George Dockrell: George Dockrell will be a reliable captaincy pick in this match as he will be getting multiple opportunities to pile up points from both departments. He scored 364 runs, while also picking up 4 wickets for his side in the IP 50 Cup. He will be a key addition to fantasy teams.

Simi Singh: Simi Singh is another healthy addition to the team from the all-rounder section who has the potential to win games single-handedly, he will be a valuable asset for the team. Singh scored 51 runs, while also picking up 5 wickets for his side in the IP 50 Cup.

Andy Balbirnie: The Ireland national team skipper is on the brink of completing 2000 runs in T20 Cricket. He will anchor the innings if his side gets off to a poor start early on. He will be hoping to help his side with an excellent start once again here.

Tyrone Kane: Tyrone Kane can contribute with bat as well as with the ball, he will be a must-have pick here. He picked up 7 wickets, while also scoring 132 runs for his side in the recently concluded IP 50 Cup.

Barry Mccarthy: Barry McCarthy was the top wicket in the Inter-Provincial 50 over Cup competition with 17 wickets from 6 matches. He will be a key addition to fantasy teams.

Curtis Campher: Curtis Campher will be a safe addition to the fantasy team here, he will be aiming to fetch decent runs as well as wickets in this clash. You can pick as grand league captain & vice-captain.

Joshua Little: Joshua Little was in good rhythm in the series against the Netherlands with 8 scalps from 3 matches at an average of 13.25. He can help you save credits.