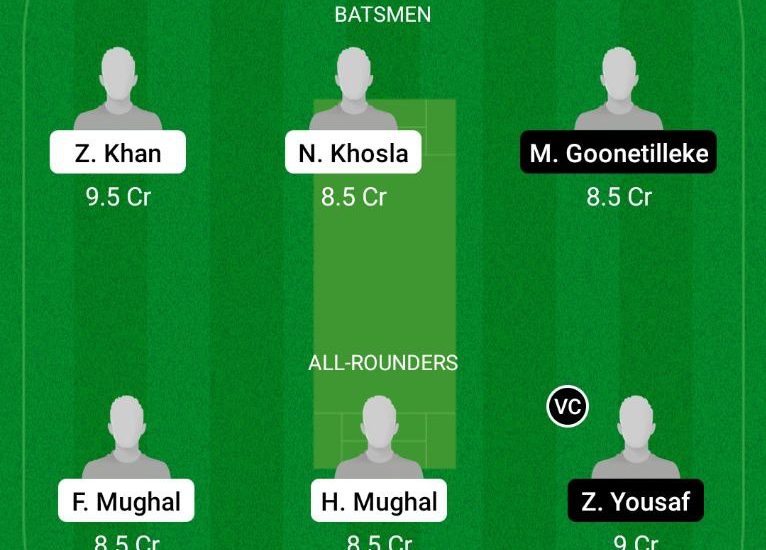 Muhammad Bilal: Muhammad Bilal is a fine all-rounder pick for this game. He scored 26 runs and took 1 wicket in the 1 game he has played so far. We back him to put another strong performance.

Zeeshan Yousaf: Zeeshan Yousaf has scored 36 runs in 2 matches, with his 29 being the highest individual score of the tournament so far. He can reap rewards for your fantasy team in this match.

Nowell Khosla: Nowell Khosla has picked up 4 scalps in this tournament so far and will be aiming to stack handy points once again. He will be a key inclusion to fantasy squads.

Niraj Khanna: Niraj Khanna has scored 77 runs, while also picking up 1 wicket in this tournament so far. He can make a healthy impact once again in this match.

Haroon Mughal: Haroon Mughal has looked good so far and can turn out to be effective in both the departments once again in this match. He will be a valuable asset to the team here.

Zeeshan Khan: Zeeshan Khan smashed 44 runs in the last match. He can turn the game anytime with his incredible hard-hitting ability. He can reap rewards for your fantasy team in this match.

Fanyan Mughal: Fanyan Mughal is a player who can have an all-round impact on this game. He can contribute both with his batting and bowling. We back him to do well.

Jojo Thomas: Jojo Thomas is the leading bowler for his side. He has scalped an impressive 5 wickets in 2 games at a good economy rate of 5.75. We back him to keep adding more wickets to his tally.