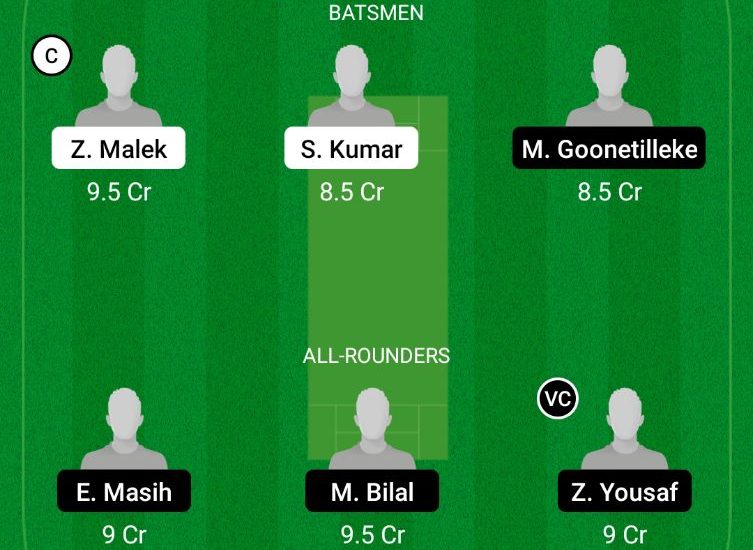 This match of ECS T10 Malta 2021 will be played between Southern Crusaders and Americal University of Malta at Marsa Sports Club. Pitch is expected to be batting friendly and plenty of runs can be expected. Batsmen need to settle down a bit before going for their shots. 64 runs have been the first innings par score, with the teams batting first having a good win record at this venue.

Zoheb Malek: Zoheb Malek is a bowling all-rounder who will bat in middle order and bowl his quota of 2 overs of off spin. He is known for his wicket taking abilities and can also score good amount of runs if top order fails. He has scored 62 runs and picked 6 wickets so far.

Zeeshan Yousaf: Zeeshan Yousaf is a batting all-rounder who will bowl pace and will bat in top order. He is known for his hitting abilities and can be lethal if he stays at crease for sometime. He also has the ability to break partnership. He has scored 59 runs and picked 4 wickets so far.

Muhammad Bilal: Muhammad Bilal is a pace bowling all-rounder who can surprise with a big knock every now and than when promoted in batting. He hits the ball hard and can clear boundaries of any size. He can be counted to pick wickets. He has scored 48 runs and picked 2 wickets so far.

Darshit Patankar: Darshit Patankar is a wicket-keeper batsman who will bat in top order. He is known for his explosive batting and can be deadly on his day. He will go after the bowlers right from start and is not afraid to take the aerial route. He has scored 193 runs so far.

Jojo Thomas: Jojo Thomas is a off spinner who will keep things tight after power play. He bowls with good control and has the ability to pick regular wickets. He can also score some quick runs in lower order. He has picked 8 wickets so far.

Shubham Patel: Shubham Patel is a pace bowler who will both with the new ball and will look to make early inroads. He can swing the ball at good pace and can be deadly if pitch supports pace. He has picked 5 wickets so far.