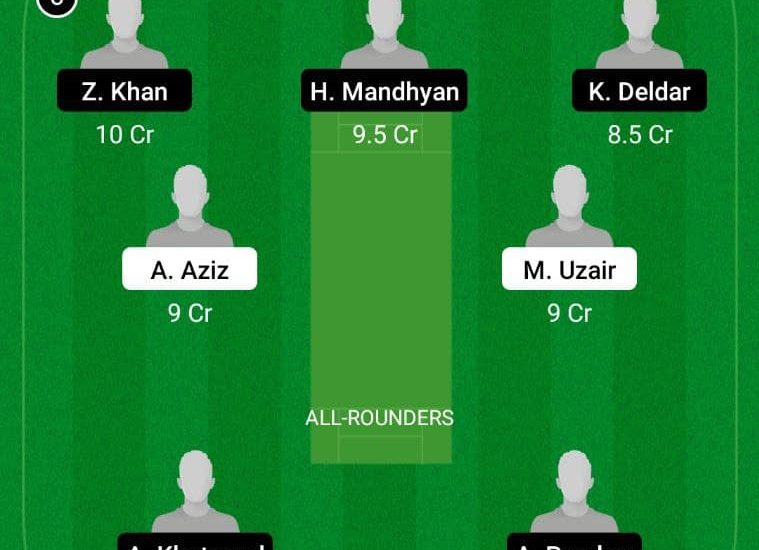 The pitch at this ground tends to be more suited for the pacers than it is for spinners. The average first-innings score on this ground is 95-100 runs & the total average of both innings is 93 runs.

Zeeshan Khan: Royal Tigers’ stalwart Zeeshan Khan is a must-have pick in the fantasy team. He is off to a superb start with both bat and ball. The star batting all-rounder has produced 117 runs and two wickets. Zeeshan Khan’s all-round ability makes him a top choice for captaincy.

Omer Zahid: Bowling all-rounder Omer Zahid is a key contributor for the Blizzards. The 33-year-old Omer Zahid has been on fire especially with the ball. He has contributed 56 runs and seven wickets from just four matches. He will be the vice-captain for this match.

Sachin Chauhan: Blinders Blizzards’ skipper Sachin Chauhan is an attacking top-order batsman. His attacking nature bodes well with the format. He starred with a cracking 25-ball 44 in the last match against Cobra Cricket Club. So far, Sachin Chauhan has made 92 runs in four matches.

Rahul Goyal: Rahul Goyal is another healthy addition to the team from the all-rounder section who has the potential to win games single-handedly, he will be a valuable asset for the team.

Amjad Aziz: Amjad Aziz hasn’t contributed much with the bat so far but he done well to take four wickets in the first four matches. He has come up with 39 runs and four wickets until now. He will look to add more to his tally in this game, making him a must-have pick.

Harsh Mandhyan: Harsh Mandhyan will look to bounce back in this fixture after a quiet outing in the previous match. He has not played a long knock yet in this competition, but has scored 18 runs at a strike rate of 180.00. He has plucked a wicket as well.