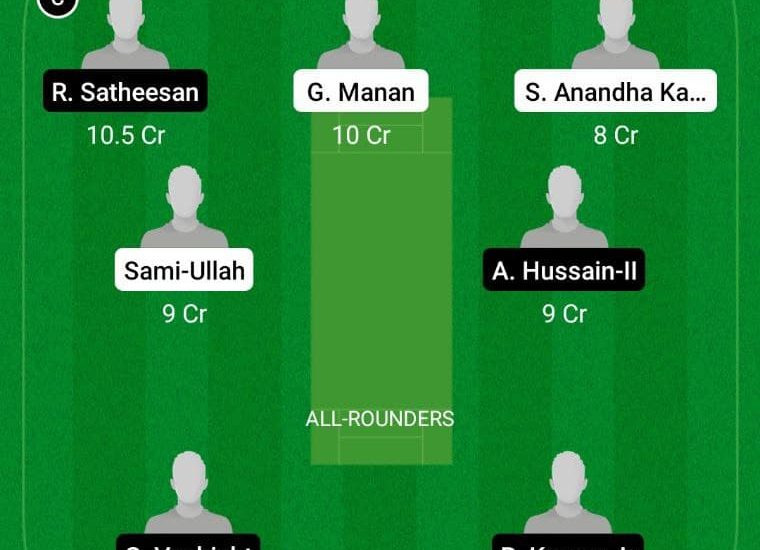 The 11th match of the ECS T10 Romania will see ACCB taking on United in the third match of the quadruple-header on Wednesday. ACCB have had a good tournament so far. They have won three wins in four matches. United, on the other hand, have two wins in four matches. They lost both the meetings against Cluj on Tuesday. United will be looking to get their campaign back on track. All in all, a crackerjack of a match is on the cards.

Ramesh Satheesan: United’s star all-rounder Ramesh Satheesan is a must-have pick in the fantasy team. His ability to contribute with both bat and ball makes him a top pick. Satheesan starred with 29 runs and one wicket against Cluj on Tuesday. Overall, the talented all-rounder has produced 124 runs and six wickets from four matches. He will be the captain for this match.

Abdul Asif Bevinje: Listed in the bowlers’ category, Abdul Asif Bevinje is an excellent all-rounder who is capable of racking up big numbers. After an impressive show in the first two games, the star all-rounder continued from where he left off against the Gladiators with a superb 60-run knock. So far, Asif has contributed 141 runs and four wickets from four matches.

Gohar Manan: Gohar Manan started the season in spectacular fashion, scoring a century in the opening game (112*). He has the tremendous ability with the bat and has gone on to do a fine job, top-scoring for his side with 196 runs to his name with a strike rate of 297. He can reap rewards for your fantasy team in this match.

Rajesh Kumar Jr: Rajesh Kumar is a great asset to any team in this format and can win the matches single-handedly. He is in good touch and contributing in all the departments of the game. He has scored 67 runs, while also picking up 4 wickets in this tournament so far.

Shantanu Vashisht: Shantanu Vashisht failed to trouble the scorers as he got dismissed for a duck but did very well with the ball to take two wickets against Cluj in the previous match. Overall, he has come up with 53 runs and four wickets in four matches.

Ali Hussain II: Ali Hussain is a top player. He opens the batting and bowls his overs. He has picked up 6 wickets and has scored 66 runs in the tournament thus far and would look to carry his form. Vashisht takes the important No. 3 spot in the side. The all-rounder has scored 53 runs. He has done a fine job with the ball as well, picking up 4 wickets.