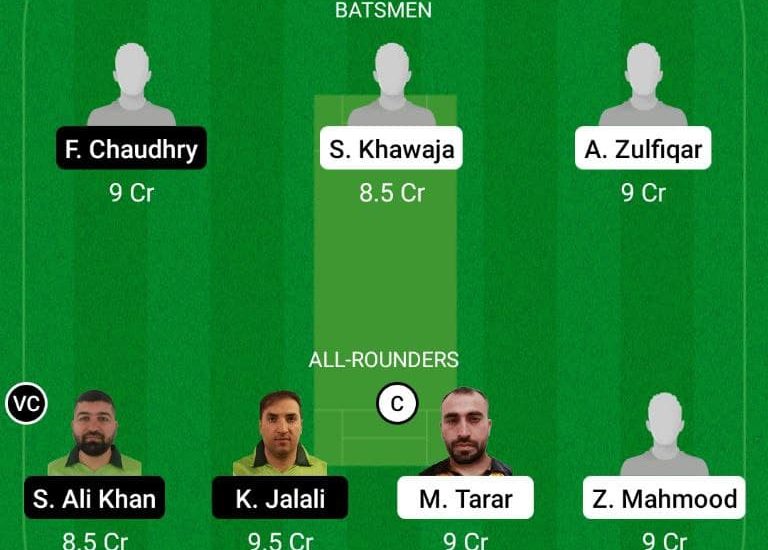 NOTE: I Will Updated Official Batting Order Lineup In the Last 20 Minutes Before Of the Match Deadline. So, Must Check Article Again Or Directly Join Our Telegram.

You can watch out for Botkyrka vs Pakistanska Forening T10 match live scorecard or live match streaming on Fancode App. You can download the Fancode application from Google Playstore or App Store.

Sameer Ali Khan: Sameer Ali Khan has the potential to contribute fantasy points with both bat and ball in this match, he will be a must-have pick here. So far, he has scored 57 runs, while also picking up 2 scalps in this tournament and will be aiming to stack handy points once again.

Khalil Jalali: Khalil Jalali is the best all-rounder for his team who can give a good number of points with bat and ball, he will be a must-have pick here. He has scored 43 runs, while also picking up 3 wickets from 4 outings in this tournament.

Muhammad Tarar: Tarar has been in brilliant form with both bat and ball this season so far. He is a top-quality all-rounder who can single-handedly win games for his side. Tarar has scored 72 runs at a strike rate of 120 and also picked up five wickets at an economy rate of just 6.16 in three matches. He is surely a must-pick for your fantasy teams.

Zeeshan Mahmood: Zeeshan is a great asset to any team in this format and can win the matches single-handedly. He is in good touch and contributing to all the departments of the game. He has scored 40 runs, while also picking up 4 wickets from 3 outings in this tournament. He has the potential to win games single-handedly, he will be a valuable asset for the team.

Faraan Chaudhry: Farhaan Chaudhry has notched up 72 runs at a strike rate of 175.61 in this tournament. He will be batting in the top-order and will be hoping to help his side with an excellent start once again here. He has a top score of 35 and has hit 11 fours and 2 sixes. He can reap rewards for your fantasy team in this match.

Bilal Muhammad II: Muhammad is one of the consistent performers with ball for Pakistanska Forening in this ongoing season. He has picked up five wickets including his best figures of 2/5 in the four matches he played this season. He will look to add more to his tally in this game, making him a must-have pick.

Zubair Aslam: Zubair Aslam will be given the responsibility of picking a few crucial scalps early on in this match to help his side with a healthy start. He has picked up 6 scalps in this tournament so far and will be aiming to stack handy points once again.